What is Oil Sands

Oil sands are deposits of bitumen, a heavy black viscous oil that must be rigorously treated to convert it into an upgraded crude oil before it can be used by refineries to produce gasoline and diesel fuels. Until recently, Alberta's bitumen deposits were known as tar sands but are now referred to as oil sands.

Bitumen is best described as a thick, sticky form of crude oil, so heavy and viscous that it will not flow unless heated or diluted with lighter hydrocarbons. At room temperature, it is much like cold molasses.

Compared to conventional crude oil, bitumen requires some additional upgrading before it can be refined. It also requires dilution with lighter hydrocarbons to make it transportable by pipelines.

Bitumen makes up about 10-12 per cent of the actual oil sands found in Alberta. The remainder is 80-85 per cent mineral matter - including sand and clays - and 4-6 per cent water.

While conventional crude oil flows naturally or is pumped from the ground, oil sands must be mined or recovered in situ - meaning 'in place.' Oil sands recovery processes include extraction and separation systems to remove the bitumen from sand and water.

Alberta's oil sands comprise one of the world's two largest sources of bitumen; the other is in Venezuela.

Oil sands are found in three places in Alberta - the Athabasca, Peace River and Cold Lake regions - and cover a total of nearly 140,200* square kilometres.

Mineable bitumen deposits are located near the surface and can be recovered by open-pit mining techniques. For example, the Syncrude and Suncor oil sands operations near Fort McMurray, Alberta, use the world's largest trucks and shovels to recover bitumen.

About two tonnes of oil sands must be dug up, moved and processed to produce one barrel of oil. Roughly 75 per cent of the bitumen can be recovered from sand; processed sand has to be returned to the pit and the site reclaimed.

In situ recovery is used for bitumen deposits buried too deeply - more than 75 metres - for mining to be practical. Most in situ bitumen and heavy oil production comes from deposits buried more than 400 metres below the surface of the earth.

Cyclicsteam stimulation (CSS) and steam-assisted gravity drainage (SAGD) are in situ recovery methods, which include thermal injection through vertical or horizontal wells, solvent injection and CO2 methods. Canada's largest in situ bitumen recovery project is at Cold Lake, where deposits are heated by steam injection to bring bitumen to the surface, then diluted with condensate for shipping by pipelines.

Other technologies are emerging such as pulse technology and vapour recovery extraction (VAPEX).

How much of the oil sands area is being developed?

Approximately 2800 oil sands lease agreements are currently in place with the province, totalling 43,800 square kilometres. This leaves close to 69 per cent of oil sands areas available for exploration and leasing.

A large part of mining operations involves clearing trees and brush from a site and removing the overburden - the topsoil, muskeg, sand, clay and gravel - that sits atop the oil sands deposit. The topsoil and muskeg are stockpiled so they can be replaced as sections of the mined-out area are reclaimed; the rest of the overburden is used to reconstruct the landscape when mining is completed.

Developers are required to restore oil sands mining sites to at least the equivalent of their previous biological productivity, which means the region as a whole forms an ecosystem landscape at least as healthy and productive as that which existed before development.

Oil sands operations emit carbon dioxide, a greenhouse gas (GHG), which is considered a contributor to climate change. Oil sands developers have been actively working towards reducing CO2 emissions by 45 per cent per barrel by 2010, compared to 1990 levels.

More information about GHGs and climate change is available at www.gov.ab.ca , Alberta Environment's website devoted to the topic. 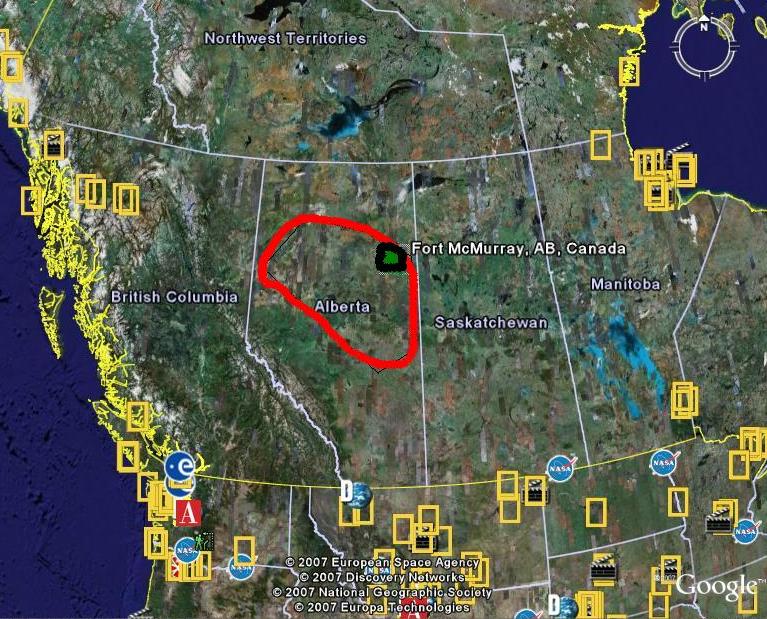 How can I find out about employment in Albertas oil sands industry?

There are numerous opportunities in the oil sands industry.  You should contact the individual companies with projects in the oil sands or visit their respective web sites for information regarding potential positions.

For information on training, apprenticeship and employment in trades in Alberta, you may wish to see the Government of Alberta web site, www.tradesecrets.org .

For potential employment in the Alberta public service, you should see the website of the Personnel Administration Office at: www.pao.gov.ab.ca.