While energy demand may be tempered by a slowdown in global economic growth, longer term growing energy demands and supply constraints will continue to present incredible challenges. Much more capital will need to be allocated to the sector to address supply issues, which should create opportunities for investors. We noted the following developments in the energy sector last month:

"If you think that at the moment the world is consuming 30-plus billion barrels a year of oil and is finding seven or eight billion barrels a year, and this state of affairs has been going on now for 20 or more years. . . It's obviously unsustainable and the world is increasingly drawing on the bigger, older fields. You couple that notion with the irreversibility of decline and you've got a very alarming picture."

Dr. Buckee says the cost of a barrel of oil could reach as high as $200 by the third or fourth quarters of this year, and that prices would have to get that high before it would have any particular impact on demand. "I don't think that really we've seen any rationing of consumption by price," he said. Source: (ABC Premium News ( Australia )) 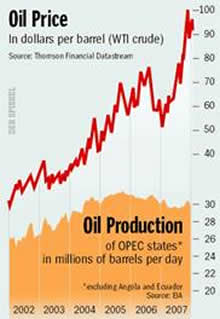 Some argue it may not be possible to boost flows beyond the current rate of 86 million barrels per day (bpd). Conventional supply from non-OPEC producers have missed forecasts in recent years and appear for now to have hit an "effective plateau", according to the International Energy Agency (IEA), adviser to industrialized countries. (Reuters)

The Nigerian move reinforces a global trend of oil-exporting countries demanding better concession terms to reflect surging prices. Oil executives say the government's decision to follow the example of countries such as Russia , Algeria and Venezuela . Militant violence in Nigeria has shut in a fifth of output since 2006. (Financial Times)

Royal Dutch Shell, the largest foreign company in the strife-torn Niger River Delta, said it would take a $716 million charge against earnings due to the deteriorating security situation. Industry sources say that in addition to the production shutdown about 435 miles of pipeline and thousands of barrels a day of crude oil and condensates have been stolen. Much of the pipeline has been used for pillars in house construction. Nigeria 's government is also not paying its share of joint-venture investments in the Shell venture, claiming it cannot fund its portion. Nigeria has budgeted only $5 billion of the $9 billion it was supposed to invest in the Shell operated project in 2008.

Nigeria is one of the major OPEC exporters of light, sweet crude oil, so any disruptions in supply will quickly impact world markets. ( Washington Post, BusinessWeek)

The Chinese economy has expanded by 11.4% over the past year, reaching its fastest growth rate in 13 years. The Chinese economy is very energy inefficient. It takes more than four times as much energy to generate a unit of GNP in China than in does in the U.S. according to a recent study published by Gordon Feller (chart at right).

The decrease in production would be a drop of 16 percent from Cantarell's December 2007 output of 1.26 million barrels per day (bpd), its lowest level of the year. Yields at Cantarell declined 16 percent during 2007, slightly more than forecast. Pemex aims to keep its total crude output at around 3.1 million bpd by increasing production at other fields. Total Mexican output in 2007 declined by 5.3 percent. (Reuters)

Low nuclear utilization is one reason for the strong incremental gas demand. Imports from Canada are also lagging. For the month the draw was 659 Bcf compared to a five year average draw of 580 Bcf. Working gas in storage now totals 4% above the five-year average and 13% below last year's levels.

Depending on the weather the next couple of months the volumetric draw from storage could be the largest we have ever seen. The chart at right from AmericanOilman.com tells the story. From a five year high (blue line) in week 49 of 2007 we have fallen quickly (yellow line) in 2008.

If trends continue we will need to inject much more natural gas into storage this spring and summer than we did in 2007, which should help keep prices firm.

If 2008 global demand forecasts of nearly 88 million barrels per day are correct, even the spike in production will not meet the growing demand. In that case demand would have to be met by draw-downs in inventories. Or supplies would need to be rationed by higher prices.

We think the supply and demand trends in the energy sector are long term issues, and that they present very attractive opportunities for investors.

Joseph R. Dancy, is manager of the LSGI Technology Venture Fund LP, a private mutual fund for SEC accredited investors formed to focus on the most inefficient part of the equity market. The goal of the LSGI Fund is to utilize applied financial theory to substantially outperform all the major market indexes over time.

He is a Trustee on the Michigan Tech Foundation, and is on the Finance Committee which oversees the management of that institutions endowment funds. He is also employed as an Adjunct Professor of Law by Southern Methodist University School of Law in Dallas, Texas, teaching Oil & Gas Law, Oil & Gas Environmental Law, and Environmental Law, and coaches ice hockey in the Junior Dallas Stars organization.