The most surprising tidbit in Matthew Simmons' peak oil book, Twilight in the Desert, is about a dubious oil consultancy based in Austria.

The data were keenly awaited by the marketplace and could move the price of crude sharply and quickly. Investors, users and producers paid handsomely for the information.

What the book revealed was that this towering fountain of information was housed in a small, dumpy office above a corner store in land-locked Vienna and the data weren't, in retrospect, particularly reliable. For all we know, it might have cobbled together its theories by dumpster diving behind the nearby headquarters of the Organization of Petroleum Exporting Countries.

Oil is the lifeblood of the world's economy and yet the oil markets are clouded in dubious information. Take Mr. Simmons' thesis, that Saudi Arabian production was on the verge of declining. The kingdom angrily denied this. The fact that there could even be an argument was only possible because of the secrecy with which it and other OPEC producers guard their data.

Mr. Simmons reached his conclusion by poring over hundreds of technical articles published in academic and industry journals, and sketching what he considered a more realistic picture.

Oil companies disputed the idea. Over the past couple of years, Exxon executives have shaken their heads at peak theories and even the oil price, insisting that their refineries weren't having any trouble finding crude.

That tended not to make headlines, though. What did were predictions of oil at $150 (U.S.) or even $200 a barrel, talk of a superspike, coined by bullish Goldman Sachs oil analysts a few years ago, and lots of peak oil flame fanning (Mr. Simmons, while a proponent, didn't get into the prediction racket.)

That message fed on itself, the upshot being $145-a-barrel oil, fleetingly. Drowned out by the noise were the warnings, such as this one from the head of Fidelity International's head of institutional investment on June 10: Oil and commodity markets are in the hands of the investment banks. 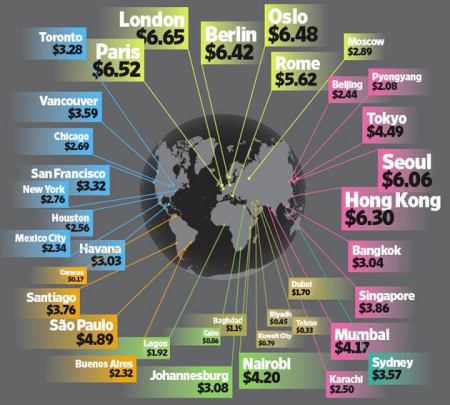 What did Michael Gordon mean by that? Quite simply that the investment banks making bullish calls on oil had tremendous sway with investors, or with traders like hedge funds anyway.

They also had a very good reason to tout oil: These big international banks operate huge proprietary trading desks that speculate on and invest in oil and other commodities daily.

Goldman's star oil analysts have moved markets with their calls. I'm willing to bet they've moved the bottom lines of the trading desk too.

Without putting too fine a point on it, there is a parallel to the tech bubble of 2000 in this. It's not perfect of course  commodity producers have big cash flows and real profits, whereas most tech stocks didn't  but the similarity is there: At the core lies a promising and real idea.

Back then it was that there were big profits to be made in the information age. That's certainly true, as Google, eBay, Amazon and others can attest to. And today, it's that there's money to be made owning oil as it runs out. Obviously true, again.

The other similarity is that the ideas were, in broker-speak, oversubscribed (I should say may have been oversubscribed in the case of oil, since it could go to $150 pretty quickly in theory). In both cases, the information that took a sound idea and blew it into a bubble came largely from dealers with a vested interest.

So if investing is about acting on the best information you can get your hands on, where should you turn for oil intelligence? You might start by ignoring the investment banks.

Oil companies and OPEC seem to be a little more conservative and forthcoming, but then again they sure love $125 oil, so they're not likely to come perfectly clean.

How about your dog-eared economics textbook though? The one that says commodity prices inevitably move in cycles? Simply put, peak oil or not, the faster prices rise, the harder they'll fall.

It's Time to Buy Energy

Oil prices reach a new all-time high of $147 a barrel and bring with them a crescendo of buzz from investors, corporations, and world leaders. It is the peak of Peak Oil claims.

Monday, July 14. A young energy analyst sporting an ill-fitting tie tells CNBC Asia's Amanda Drury and Sri Jegarajah that oil's run will come to an end, since prices, more than twice the marginal cost to produce the oil, are disconnected from reality.

Since that conversation, oil has slid by $42 in about as many days. Who was this prescient predictor of petroleum prices? Should you be following his every move?

Me. And no.
Rest assured, this isn't a pat on the back about my lucky televised call about oil prices losing steam -- my mom has that plenty covered.

But I have another forward-looking statement for you: With energy prices having fallen precipitously, I believe now is exactly the time to start looking at energy stocks.

Since my last (and, admittedly, first) live TV appearance, oil and natural gas prices have fallen 28% and 43%, respectively -- in just two months. That means that a lot of quality energy names have suddenly found themselves with bargain-bin valuations.

What you must know about energy stocks
Before you consider pulling the trigger on oil or gas plays, though, you must understand this: In the short run, prices are entirely unpredictable. Even by so-called experts.

Witness this week's shutdown of the once-highflying flagship fund of the commodity gurus at Ospraie Management. After returning a market-crushing 15% annually for the past nine years, Ospraie is closing the fund after having lost 27% of its value in August alone. Nine years of stellar returns, and a single month can bring you down. Welcome to commodities investing.

But does the notorious volatility in energy stocks and prices over the short- and medium-term mean you should just punt on the sector? Absolutely not.

While making short-run bets on energy prices is financial roulette for all but the most in-the-know energy traders, the long-term case for keeping oil and gas exposure in your portfolio is perfectly clear. Consider that:

Put that all together, and it's little wonder that you've seen oil prices boom over the past several years. And with all of the strong undercurrents supporting high energy prices going forward, this is the time for you to nail down just which energy plays you'd like to snatch up, should prices fall any further.

3 outstanding energy plays
Since natural gas has been particularly hard-hit, value hawks should be looking toward producers with impressive track records, such as Chesapeake Energy (NYSE: CHK) and XTO Energy (NYSE: XTO). With price drops like this, even heavily followed oil majors such as Chevron (NYSE: CVX) and ExxonMobil (NYSE: XOM) and oil-sands expert Canadian Natural Resources (NYSE: CNQ) could once again be catching the eye of forward-looking value investors.

But beyond the big boys, which energy stocks should you be looking at? We're bullish on three outstanding energy plays right now. One is a deeply out-of-favor value play, another is a steady dividend payer with room to run, and the third is a little-known E&P that's poised to pop when energy prices turn the corner.

You can get all three recommendations, along with our rationales for recommending them, by requesting our free report, What You Need to Know About the "Oil Crisis." All you have to do to get it sent to your inbox is click here.

That old Buffett maxim of being "fearful when others are greedy and greedy when others are fearful" is especially true when it comes to commodities investing. So let the fearful keep selling -- and be greedy.

Joe Magyer owns no shares of companies mentioned in this article. Petrobras is a Motley Fool Income Investor recommendation, while Chesapeake Energy is an Inside Value pick. The Motley Fool has a disclosure policy.