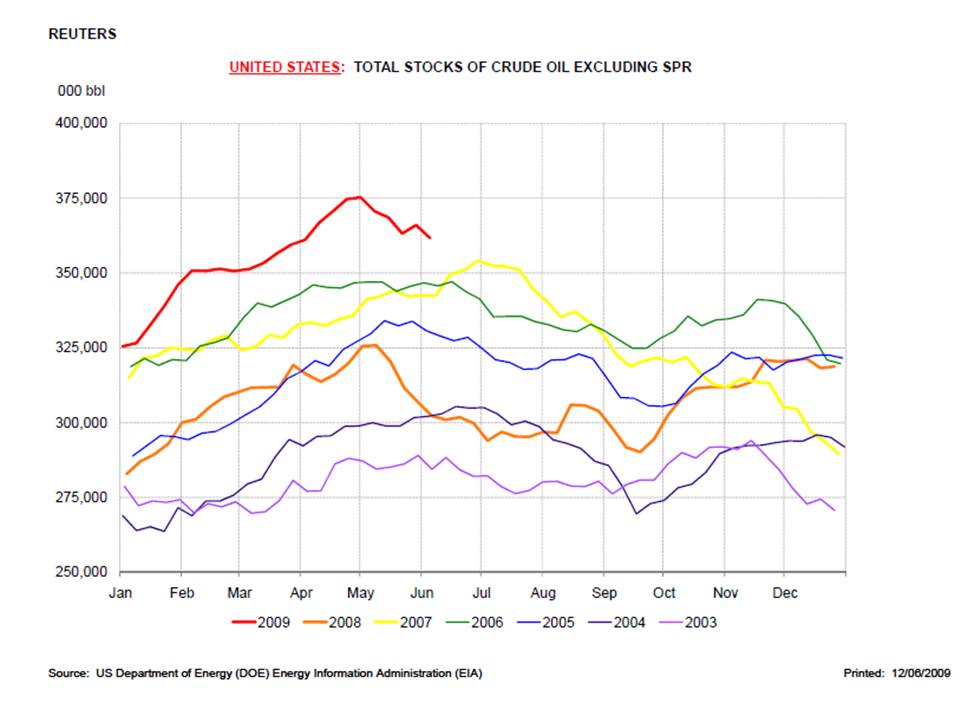 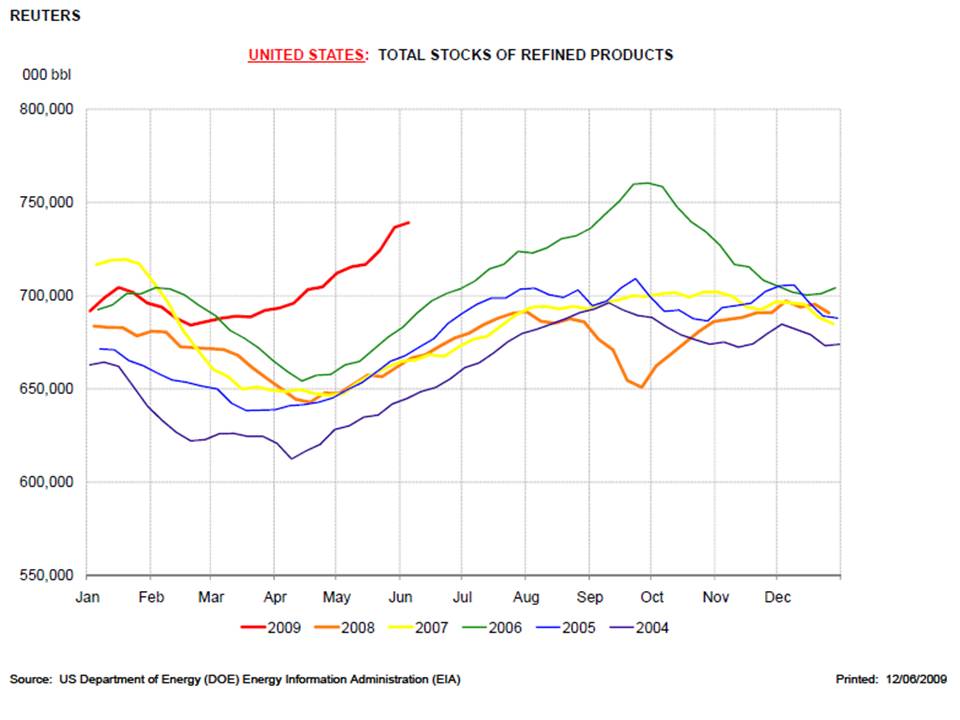 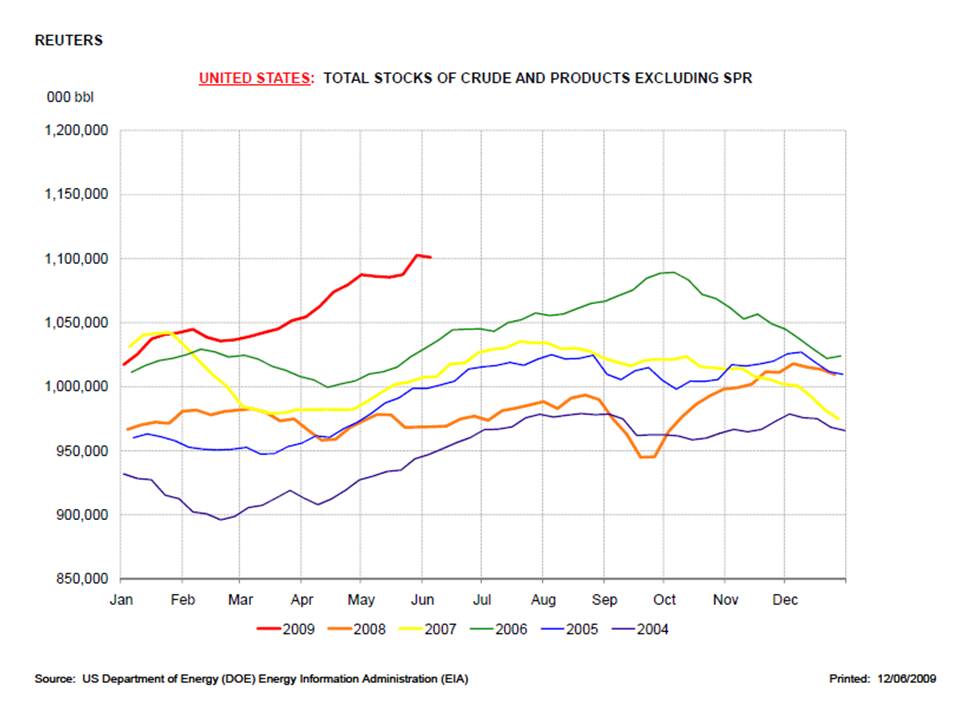 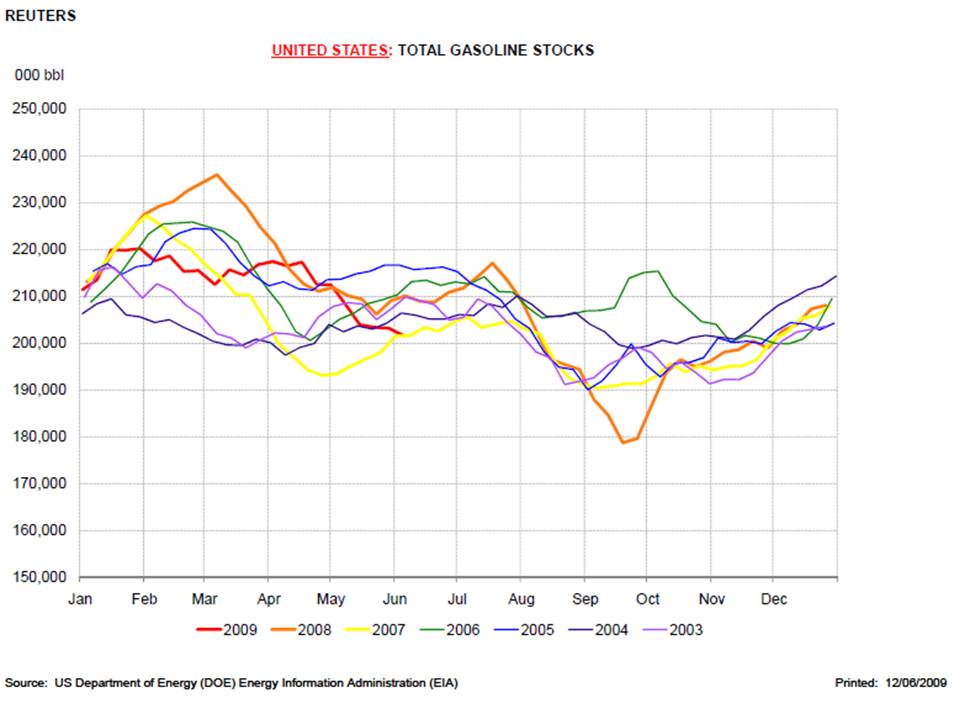 -- John Kemp is a Reuters columnist. The views expressed are his own --
By John Kemp
LONDON, June 12 (Reuters) - Crude oil prices have doubled since the start of February, with the front-month light sweet crude futures contract on NYMEX up from a Feb. 12 low of $33 to close above $72 on Thursday. But the rally appears increasingly frothy. While the crude market looks firmer, stocks and prices for refined products tell a very different story.
Crude bulls have taken heart from the recent fall in U.S. crude inventories and signs that the worst of the manufacturing recession is over. The International Energy Agency (IEA) on Thursday revised its forecast to show a smaller decline in crude consumption this year.
But low refinery run rates and poor demand have left the market carrying a huge stock of refined products that will take months to work down.
The volume of crude oil held in commercial storage in the United States has slipped from a peak of 376 million barrels (bbl) at the beginning of May to 362 million bbl on June 5. But it is still 11 million bbl (3.1 percent) higher than at the start of February, and a massive 59 million bbl (20 percent) higher than at the same point last year.
The real problem is the massive overhang of refined petroleum products being held at refineries and tank farms around the United States (and in some cases on tankers moored off the coast).
Product stocks on land reported to the Energy Information Administration (EIA) have swelled to 739 million bbl, up 45 million bbl (7 percent) since February and 73 million bbl (11 percent) since last year. Refined stocks are equivalent to around 39 days' consumption at current rates, up from 33 days at the same point last year.
Stocks of gasoline are low (just 202 million bbl, down from 218 million bbl in February and 210 million bbl this time last year). Refiners have averted a build up of unwanted inventory by cutting throughput, and gasoline consumption is down only marginally compared with last year as car use by private motorists has held up relatively strongly.
But stocks of other products such as diesel, heating oil, and petrochemical feedstocks (propane, propylene, unfinished oils and other oils) have risen to five-year highs as a result of the collapse in petrochemical production and the deep downturn in commercial freight movements.
REFINING MARGINS, NATGAS
Refining margins remain under pressure as prices for products have failed to match the upward movement in crude oil. Refiners are making only 28 cents on a gallon of gasoline, and 15 cents on diesel, to offset losses of $1.10 on fuel oil and cover their operating and capital costs. Margins have failed to improve even as gasoline stocks have fallen during spring and going into the summer driving season.
Part of the problem is stiff competition from cheap and plentiful natural gas, which competes with oil in the petrochemical industry and among power utilities. Natgas stocks in working storage have risen to 2,443 billion cubic feet (bcf), up 557 bcf (30 percent) compared with 2008 (1886 bcf) and above the previous five-year maximum of 2353 bcf.
Gas prices have remained trapped at seven years lows since February, even as oil has rallied. In terms of energy content, the gap between crude oil prices ($12 per million British thermal units) and natural gas (at less than $4 per million Btu) is wider than at any time since the start of the decade.
Gas production is set to fall sharply towards the end of 2009 and into 2010. The number of drilling rigs sinking new exploration and development wells has halved in the last nine months as gas companies have sought to defer investment in response to falling demand and tumbling prices.
But in the meantime the market is still struggling to absorb the huge supply increase that is the legacy of high prices and heavy investment over the previous three years.
Prices look set to remain trapped for the next few months until demand picks up, or slower well completion rates begin to have an impact on new production. For the time being, cheap gas is keeping fuel oil out of the power stack, and putting downward pressure on margins.
GASOLINE, INTERMEDIATES
Even on gasoline, margins have failed to improve despite inventories approaching five-year lows. But the reported inventory figures may not be telling the whole story.
In weekly EIA data, refiners also report the existence of a record lake of "other oils" amounting to 162 million bbl, up 26 million barrels (20 percent) since the middle of April and 24 million bbl (17 percent) higher than the same point last year.
EIA does not break out the composition of this miscellaneous category. It includes both refinery bottoms (asphalt and road oil) and lighter products (aviation gasoline and kerosene). But a large part is probably intermediates such as naphtha that would normally be destined for petrochemical production but could just as easily be switched to the gasoline pool.
The existence of this massive stock of naphtha and other oils means that gasoline stocks may be 5-15 million bbl higher than the reported number, which is why margins are failing to rally despite the low and falling apparent inventories.
With so much refined product on hand, refinery runs will remain depressed for at least the next three months and probably through the end of the year and into early 2010. Even if the state of the economy improves, it is unlikely to draw down the overhang much faster.
The divergence between high, rising crude prices and poor refining margins can be explained by the different impact of investors on the two markets.
Strong demand from investors interested in the reflation/inflation play has buoyed crude prices, as well as low interest rates and cheap offshore storage that have reduced the cost of carry, have buoyed crude prices. In contrast, investors have shown less interest in using products as a play on the cycle, and prices there paint a truer picture of oversupply.
http://graphics.thomsonreuters.com/ce-insight/EIA-INVENTORIES.pdf
http://graphics.thomsonreuters.com/ce-insight/MARGINS.pdf
http://graphics.thomsonreuters.com/ce-insight/CRUDE-AND-NATGAS-PRICES.pdf
http://graphics.thomsonreuters.com/ce-insight/EIA-NATGAS-STOCKS-CLOUD.pdf
http://graphics.thomsonreuters.com/ce-insight/EIA-WEEKLY-NATGAS-STORAGE.pdf
(Editing by David Evans)
www.guardian.co.uk