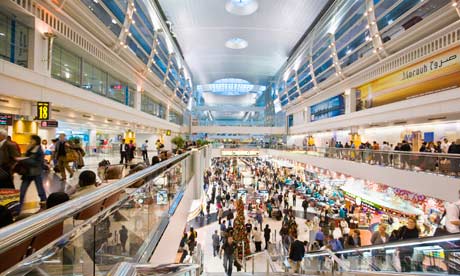 PD Smith gets a worrying glimpse of a frenetic, gas-guzzling future

In his dystopian novel The Sleeper Awakes, begun in 1899, HG Wells portrayed a future world in which vast machine-like cities were linked by air travel. Since then, no vision of the urban future has been complete without ubiquitous air transport, from Fritz Lang's Metropolis (1926), in which gnat-like aircraft soar among the skyscrapers, to the police spinners of Ridley Scott's Blade Runner (1982). In 1997 JG Ballard predicted that "the airport will be the true city of the 21st century". Now John Kasarda, an American management consultant and academic, is jetting around the world showing politicians and business leaders how Ballard's prediction is about to come true.

This "prophet of living our lives aloft" has flown more than 3m miles in the last 25 years and has "jet lag stamped on his face". Journalist Greg Lindsay, the author of this enthusiastic survey of Kasarda's ideas, is clearly a believer. As the subtitle proclaims, this is "the way we'll live next".

According to Kasarda, the future city will have "an airport at the center and concentric rings of uses radiating outward". The aerotropolis is designed for the wired, always-on "Instant Age" of smart phones and smart cities, where the only law is the survival of the swiftest. Kasarda argues that this is the next stage in globalisation, a radical rethink of how we live in a world rendered flat by new technology. Just as cities such as Southampton or Singapore grew up around their seaports, so the airport will become the heart of tomorrow's city.

Dubai is the model. It is "the aerotropolis writ large, a city of hubs designed to lure the world's wealth to its door". And as in so many other areas, China has been quick to seize the initiative. It will build 100 new airports by 2020, when it aims to have 82% of its population living within 90 minutes' drive of one. This investment will enable the iPods and other high-value goods manufactured there to travel via Hong Kong to America within 48 hours. In contrast, the west views airports as "nuisances or toxic threats". Kasarda warns: "If we don't change our minds, the game will be over. In some ways, we've already surrendered."

There is no doubt that transport  whether on four legs or four wheels  has shaped cities throughout history. But to be successful, cities have to offer so much more than docks or terminals. In a revealing phrase, Lindsay describes Kasarda's aerotropolis as "an urban machine not for living but for competition". HG Wells would have feared for the people who lived in such a place. Kasarda's overblown rhetoric cries out to be challenged, something Lindsay fails to do. But in its account of the rapidly evolving nature of work  from high-tech Chinese factories to the computerised fulfilment centres springing up around runways across America  this pacey but over-long book is at once fascinating and chilling.

Lindsay and Kasarda dismiss the idea that air travel should be curtailed due to concerns about greenhouse gas emissions and climate change as fatal for economic growth. Similarly, fears about peak oil are countered by the prospect of synthetic fuels. If the oil really does stop flowing, then they believe electrification of cars will allow reserves to be prioritised for aircraft. This dramatic option is one that Laurence Smith also raises in his book, The New North (322pp, Profile, £20). But Smith does not minimise the challenges facing our oil-addicted societies. He points out, for instance, that to meet the expected demand for oil in 2030 we would need to discover the equivalent of nine Saudi Arabias.

A scientist at UCLA, Smith studies the geophysical impact of climate change, particularly in the far north. In this measured and thoughtful book, he examines what our planet will be like 40 years from now. By 2050, the world's population will have grown to 9.2 billion, of whom 6.4 billion will live in cities, "forming crowded urban clots around the hot lower latitudes of our planet". China will be the world's largest economy, followed by the US and India. People will be wealthier and older  Japan will have 13 people of working age for every 10 retired people.

In 40 years' time global warming will have transformed the planet. Despite technological advances and a growing diversity of energy sources including renewables and nuclear, the world will still rely heavily on fossil fuels. China is currently building two coal-fired power stations a week, "equivalent to adding the entire UK power grid every year". Shockingly, coal will become the world's primary energy resource, with demand tripling by 2050.

Smith's headline conclusion is that, as global warming thaws the permafrost and frees the Arctic of sea ice, the "New North" will become increasingly important. Although the Arctic proper (north of the Arctic Circle) is very small, the New North  the land and ocean lying above the 45˚ N latitude  is vast, comprising some 29% of the world's ice-free land. The Northern Rim countries  the northern US, Canada, Russia, Iceland, Greenland, Norway, Sweden and Finland  form a bloc of a quarter of a billion people with a $7tn economy. Their population and power are set to grow dramatically by 2050, Smith predicts.

As global warming takes effect, rainfall will increase here while droughts create water-shortages in the south. Estimates suggest that 30% of the world's undiscovered natural gas and 13% of its oil lie in the shale-rich sedimentary rocks of the Arctic. Its rich natural resources might make it the next Middle East in terms of its potential for conflict. The high Arctic is destined to become an "economic engine, shovelling gas, oil, minerals and fish into the gaping global maw".

Although at times it labours under the weight of evidence, The New North is a more convincing portrayal of the future than Aerotropolis. But both books raise urgent questions about what kind of world we want to live in.