Oil Prices:  Oil prices are now back at danger levels of $115/bbl. As we have previously advised, any oil price over about $110/bbl starts to close down the OECD economies because: 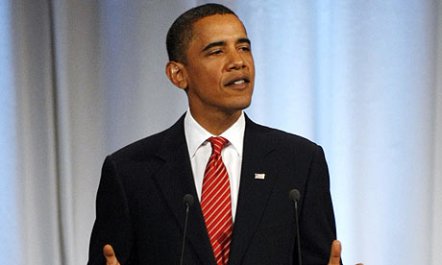 US Economy Slowing: We expect the US economy to slow down further later in 2013. When economies start to suffer and hardship rises, countries often go to war, in part to deflect blame and attention from the economic hardships back home. They can also blame the slowdown on some external influences, giving out messages about needing to do the right thing for humanity by going to war. We see this manifested today in the USs desperation to go to war against Syria  or the Syrian government. It will likely fan the flames of atrocities and lead to further knock-on conflicts within the region. I very dangerous strategy.

Oil Supply Disruptions: Despite the shale oil boom in the US driven by technology advances with fraccing in combination with horizontal drilling, the world oil suppliers are struggling to keep pace with demand. In China alone, another 70 million people each year start using oil of transport and home use.

Lets take a look at some countries with production issues:

Syria -  oil production started a steep decline in 2006 and the country has suffered severe economic and security problems since 2011, oil production has crashed from 0.6 million bbls/day to a tenth of these levels.

Libya  just before Col. Gaddafi was deposed, the country was producing 1.6 million bbls/day at a steady rate  Libya now produces 0.25 million bbl/day after oil port strikes, security problems and insurgents shutting pipeline demanding payments etc. The economy has spiralled into a miserable depression as oil revenues have dried up and civil wars have started.

Sudan  production is on-off depending on negotiation between North and South Sudan after a bitter war led to break-up.

Iraq  oil production has plateaued at this time at around 2.3 million/day  back in 2010 production was projected to recover to 5.5 million/day as security improved. However, insurgency, car bombs and sectarianism has kept back oil production growth. Oil production is no higher than before the 2003 military intervention.

Supply Crunch on Horizon:  These are only some of the lowlights. OPEC production is dropping and OECD countries are using up oil in storage at a rate of 2.2 million bbls/day  compared to demand at around 85 million bbl/day. A supply crunch is now well and truly on the horizon  it only needs one big producer to get into difficulties and the oil prices to sky-rocket/spike to $150/bbl. The situation is becoming grave. Especially as a US led war looks likely in Syria now that could or would likely fan out across the region.

Overall  demand continues to increase at a higher rate than supply, leading to tightening of supply-demand and increasing oil prices.

Security  Production Interruptions: We are seeing Peak Oil for the time being in OPEC countries not because oil is running out, but because of wars, security issues, civil disorder and supply disruptions. If oil production rates cannot be kept up for any reason, then this can cause Peak Oil in a particular country or overall around the global if several countries have the same problems.

Cost of Extraction New Oil $80/bbl:  Talk of oil demand dropping is rather overdone  indeed, it would at very high oil prices as this leads to recession and factories closing with higher unemployment and lower oil demand. So in a way, the world is struggling to supply low priced oil  new oil now needs a prices of at least $80/bbl to make it economic to develop because unconventional oil costs so much to produce  either oil shale, deepwater oil or ethanol from sugar/corn.  Hence the oil prices is directly controlling the rate of global economic growth  this has always been the case and nothing has changed.

The war in Syria will not help of course, and the US response is likely to make matters far worse as Iran and other countries and sects get involved. 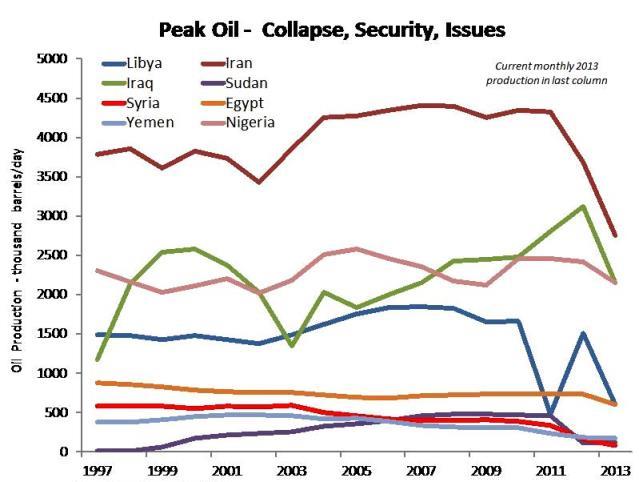 Security, sanctions and civil disorder have led to production disruptions that have caused on overall collapse in oil production in most of these countries. In summer 2013 this has led to a tightening of supply and increasing oil prices that will drive up inflation and could trigger another OECD recession. 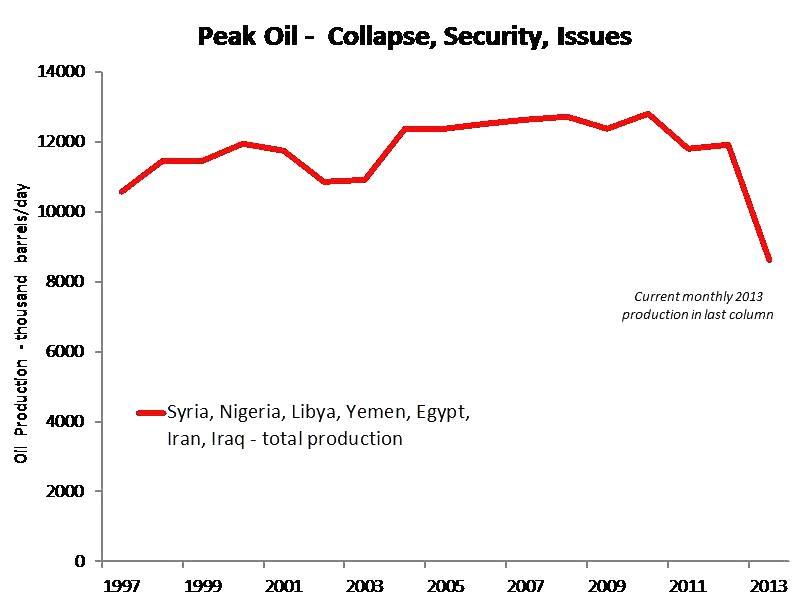