Increasing fuel efficiency and the improvements in electric vehicles will inevitably lead to demand destruction for the primary crude market.

Peak demand or stagnating growth will likely occur by 2030 and, as a result, oil prices will fall to the marginal cost of production.

Saudi Arabian strategy could already reflect this idea - leading to a desire to maintain low oil prices to reduce the risk of stranded assets.

Demand destruction in the oil (NYSEARCA:USO) markets will mean a slow and painful death for oil companies. Unquestionably, we are going to see rising demand for the next decade. However, there is an increasing likelihood that demand destruction will start to occur before 2030. A peak demand scenario will coincide with a significant and sustained drop in oil prices, and will usher in the next critical energy resources - whether that be gas, renewables, nuclear, or most likely, a combination of many.

I don't believe that I will see a world without oil. But we can quickly analyze each sector and see that the biggest change is going to come from motor gasoline and distillate/residual fuels which make up a combined 59% of total products supplied. Jet fuel has no foreseeable replacement and will likely grow in consumption, LPG will remain stagnant, and the other uses of petroleum - of which there are millions - will continue to grow as we use it in everyday life. However, demand destruction in the primary market of transportation fuels will ring the peak demand bell. 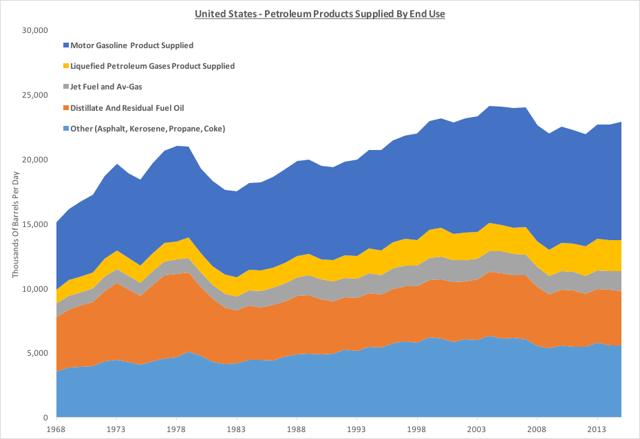 As we advance technology in batteries, more efficient cars, and as oil prices rose through to 2014, the western world had begun on a trajectory of decreasing consumption. Cars and trucks have been getting larger and more powerful, while increasing efficiency at the same time. If the trend of more powerful cars were to reverse, car companies could swiftly capture an increase in fuel efficiency. Europe has seen an even steeper rise in fuel efficiency than North America. European cars are on average smaller; Europe imposes tighter regulation and diesel is a large market. All of these factors lead to increases in fuel efficiency. 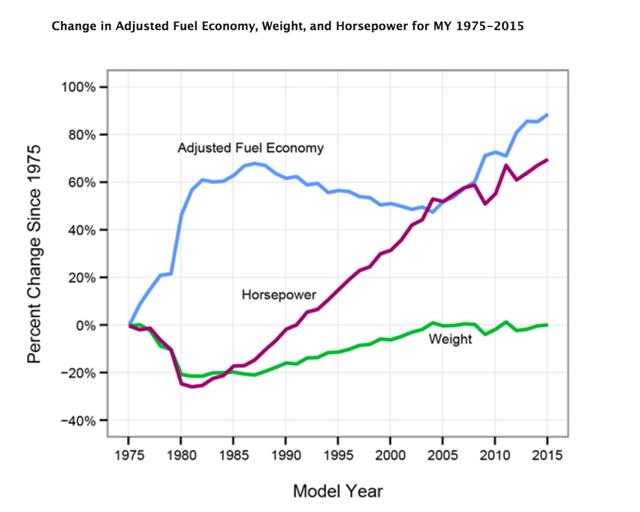 Projecting outwards, nearly every major country in the world is regulating more efficient vehicles. Those countries expect to increase fuel efficiency by approximately 50% through to 2020. The recent Paris accord will put further international pressure to improving fuel efficiency through regulation. Furthermore, Toyota (TM) plans to eliminate gasoline-powered cars to a large extent by 2050, and Chinese authorities are pushing for more alternative vehicles as smog and pollution choke their populations.

Local governments in the world's largest car market now have to dedicate 30 percent of their fleet purchase to battery-, hybrid-, and fuel cell-powered cars, and will lose fuel and operating subsidies if they fall short. The country's State Grid is accelerating the roll-out of charging stations, according to state-owned media, and mobile-phone infrastructure owner China Tower is being recruited to the task - Bloomberg Gadfly

The Rise Of The Electric Car

One of the incumbents for gasoline cars is the very contentious topic of electric vehicles. Tesla Motors (NASDAQ:TSLA) has as many haters of the stock as it does avid proponents. One needs to look no further than the comments section on any recent Tesla article to see the rivalry that exists between shorts and longs. But, the technological advantage of electric cars over that of gasoline cars is insurmountable. Electric motors have incredible power to weight ratios, a torque curve that competes with the best ICE powered vehicles. Most of all, they are getting cheaper every day. The design of an electric car, apart from the battery, lends it to decreasing costs. With far less moving parts, the assemblies are less mechanically complex, economies of scale will push the price down to those competitive with its ICE brethren in the next 5-10 years. Tesla is trying to usher in the era of the electric car, a meaningful first step to reducing reliance on fossil fuels. Tesla has shown that an electric car can compete at the top of the line, now they must prove that they can compete with an economy priced car.

Win or lose; Tesla is likely to drive down costs for batteries. In turn, they will move the electric vehicle one step closer to cost competition. If Tesla is successful in creating a mass-market Model 3, that is cost competitive and contains all the benefits of electric vehicles; there will be a sudden movement by consumers away from ICE. Furthermore, advancements in renewable energy and cheap availability of gas could reduce the cost of electricity, increasing the attractiveness of changing over.

What Happens To The Value Of Oil At Peak Demand

At present, there is ample growth to come in crude oil demand. No one will be able to predict when demand will start to decline in earnest. Despite the uncertain timeline, the trajectory is clear. We will eventually reach peak demand, and the pace towards that outcome is hastening.

Peak demand will play out slowly. We are likely to see several years of flat-lining demand, while oversupply develops in the market. It will eventually become clear that demand destruction or stagnation has begun, and suppliers will need to fight with the only thing they can control - prices. A great comparison is the coal market.

There is, for argument's sake, an infinite amount of coal. We will never consume all the coal available. It is now abundant, cheap, and margins on coal are small. Coal is rarely covered in the news anymore, but it still makes up a huge share of world energy production. In fact, peak production isn't even the problem; coal demand is expected to grow 0.8% out to 2020.

Coal was once the sole source of electricity supply. If you told someone 100 years ago, it would eventually start to die as an energy source they would have laughed at you. However, once the market comes to the realization that we have reached peak demand, there is going to be a massive selloff in correlated stocks. When predicting peak demand, a forecaster doesn't even need to be that accurate. Low growth predictions can cause the price of a commodity to plummet. If coal prices start to rise again, supply can easily ramp up to meet demand. Market dynamics of ample supply, slow or no demand growth, eventuate in commodity prices falling to the marginal cost of production. This is now the market for coal, is increasingly becoming the market for iron ore, and will become the market for oil. Exacerbating the issue is that low prices lead to a drop in the marginal cost of production due to restructuring, a fight for efficiency, and better terms with counterparties.

A similar outcome will eventuate in oil, as shale oil can ramp up production over periods of months, rather than years. There is a substantial availability of transport capacity in the U.S. that will be sitting and waiting for rising prices. Shale oil also exists in abundance around the world, time should bring those supplies to bear on the market as well.

Oil, as with coal, will be around for many more decades. However, high prices are likely to come around just once more at most. A century of growth in oil demand will eventually recede. Once demand growth slows, suppliers will do what they always do in any oversupplied commodity market - enter into a price war and fight for survival. Stranded assets are worthless, and Saudi Arabian strategy, covered here and here, suggests they have already started to realize the impending attack from alternative energy, shale oil, and changing demographics. Despite the negatives, I am also confident I will continue to find petroleum companies priced attractively. At the moment, I see very few desirable companies based on my outlook, but that scenario is unlikely to last. We could be staring at the last big rally in oil prices or a permanent change in how the market works. Either way, the best decades for oil companies are behind us.

If you found this article interesting and would like future updates, head to the top of the page next to my name and hit follow. It is free, and allows me to continue to reach a broader audience and keep writing. Thanks for reading.

Disclaimer: This article is based on opinions and are subject to error. It is not investment advice and should not be used as such.

Disclosure: I/we have no positions in any stocks mentioned, and no plans to initiate any positions within the next 72 hours.

I wrote this article myself, and it expresses my own opinions. I am not receiving compensation for it (other than from Seeking Alpha). I have no business relationship with any company whose stock is mentioned in this article.