Energy Insights: Energy News: Gloomy Days in the Oil Patch, but Some See a Glimmer of Light

EnergyInsights > Gloomy Days in the Oil Patch, but Some See a Glimmer of Light

Gloomy Days in the Oil Patch, but Some See a Glimmer of Light

By CLIFFORD KRAUSS and STANLEY REED 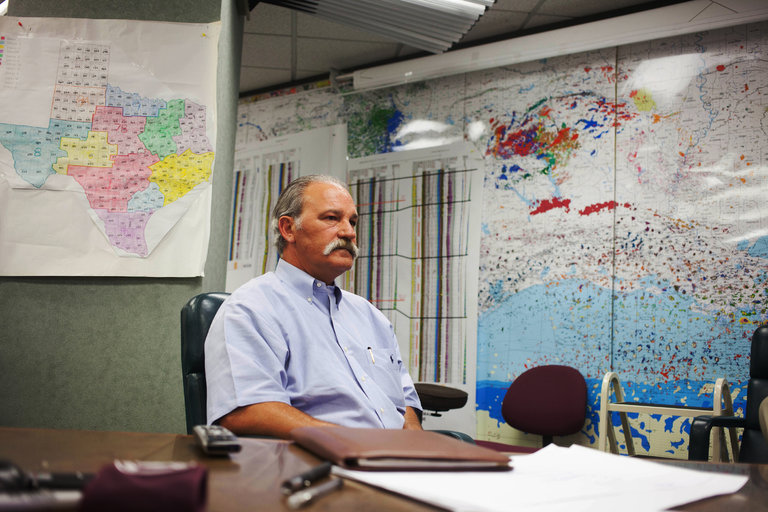 HOUSTON  As recently as two summers ago, Latshaw Drilling was so fully booked it sometimes had to turn away oil companies eager to rent one of its 39 rigs at $22,000 a day.

But that was before the collapse of oil prices, which despite a recent upturn from February lows, are still nowhere near their 2014 levels. Because of slumping world demand and a glut of global supply, oil players of all sorts  whether major producers like Royal Dutch Shell, smaller companies or service providers like Latshaw Drilling  are still struggling to cope with the industrys doldrums.

In the case of Latshaw, based in Tulsa, Okla., only 16 of its rigs are now in use, although it has cut the daily rental price by a third and aggressively phoned, wined and dined prospective customers. Even when Latshaw does make a deal, not all the workers it laid off want to return to a business that is so cyclically volatile.

Its gone quiet, said Steve McCoy, Latshaws vice president for contracts. You have to pursue every lead, turn over every rock, to try to get ahead of the game.

As the big oil companies reported their earnings this week, not even Exxon Mobil and Chevron, the two American industry leaders that posted results on Friday, could escape the fallout from a market of deteriorating oil prices and declining profit margins from refining.

Exxons second-quarter profit was down nearly 60 percent from a year earlier, to $1.7 billion. Chevron reported a loss of $1.47 billion, in contrast to a profit of $571 million in last years second quarter.

The price of a barrel of West Texas Intermediate crude oil, a benchmark, was $41.38 Friday  compared with just over $100 this time two years ago. 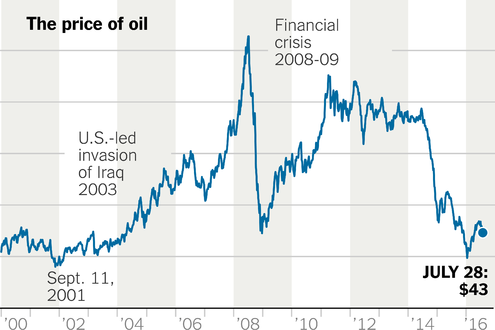 Oil companies have slashed their exploration and production budgets, many by as much as half. The cuts total more than $150 billion through next year. An estimated 150,000 energy workers have lost their jobs in the United States, while more than 150 oil and gas companies in North America have filed for bankruptcy since early 2015

"" frameBorder=0 width="100%" name=google_ads_iframe_/29390238/NYT/business/energyenvironment_11 marginWidth=0 scrolling=no>
The latest quarters results have been even more dismal than industry analysts predicted. Chevrons loss for the quarter was its largest since 2001.

Even though Exxon Mobil slashed its capital budget 38 percent, to $5.16 billion in the second quarter, those cuts were not enough to compensate for a $4.7 billion drop in profits from oil and gas production and a $1.7 billion drop in refinery earnings.

The major European producers, which have also cut exploration budgets and hundreds of thousands of jobs, did little better. Royal Dutch Shell, Total and BP all reported sharp declines in profits  Shells were down 93 percent  and executives expressed little optimism for a rapid rebound.

You have to continue to reinforce cost reduction, efficiency  rethink almost everything you do, BPs chief executive, Bob Dudley, said in an interview this week.

In a sign of the mounting pressures in the industry, contract maintenance workers staged a 24-hour strike Tuesday on seven Royal Dutch Shell platforms in the British North Sea to protest proposed pay cuts. A 48-hour strike is scheduled for next week.

We are disappointed at this development, Shell said in a statement on Friday. It is clear that in order for the North Sea oil and gas industry to remain competitive in the lower oil price environment, structural change is needed.

But the basic problem all the oil companies face is essentially out of their control: No matter how much they curb production, there is still way too much supply of crude oil in a global market where demand is soft  especially in Europe and in the developing world. 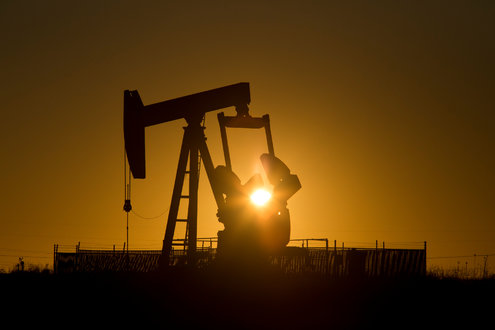 A near doubling of United States oil production in recent years, because of a frenzy of new activity in shale fields, produced a glut that persists even as output gradually falls in the United States, China, Brazil and Mexico.

Crude and petroleum product inventories remain at record highs around the world, in large part because the Organization of the Petroleum Exporting Countries cartel, which is led by Saudi Arabia and still accounts for a third of global oil output, is unwilling to restrain production. The biggest recent production increases in the OPEC cartel have come from Iran, which is taking advantage of the lifting of international sanctions.

And now Canadian output, which was briefly curtailed by recent wild fires, is coming back on the market.

United States refiners, meanwhile, bought so much oil at bargain prices in recent months that they now have record stockpiles of gasoline and diesel. That has led to the lowest summer gasoline prices in more than a decade. But it also has obliged refiners to cut fuel production, thus further cutting demand for crude.

Scattered signs indicate the oil industry has hit bottom and may be primed for a bounce next year. Many energy analysts are optimistic prices will rise for oil and natural gas over the next few years because the industry has so sharply curtailed exploration and production.

Barclays Research, for instance, projects that the global oil price could average $85 a barrel by 2018. That would still be lower than levels reached in 2014, but enough for healthy profits.

Were at the bottom, but were not expecting an immediate and sharp recovery, said Paal Kibsgaard, chief executive of Schlumberger, the giant oil service company, in a conference call this month. Its going to be a slow and steady recovery.

Latshaw Drillings 16 active rigs exceed the 12 it had in service last December. Signed contracts would raise that number to 20 by late fall. Were optimistic about our future, Mr. McCoy said.

Not everyone is in a position to ride out the storm, though, as heavy debts continue to sink some companies. Just this week, Halcon Resources, a sizable Houston oil company, filed for bankruptcy.

Exxon Mobil is in far better financial condition than most other companies in the industry. And its stock had been soaring this year, although in morning trading on Friday it was down more than 2 percent. But even Exxon has been stretched by debt  much of it an overhang from the companys purchase seven years ago of XTO Energy, a shale gas driller, for about $41 billion.

This year Exxon Mobil lost its AAA credit rating, and was forced to stop buying back shares to conserve cash.

The industry debt level is essentially like a tanker dragging an anchor. You are not going to go anywhere very fast, said Ed Hirs, managing director of Hillhouse Resources, a small Houston oil company.

Mr. Hirs, seeking to raise $50 million to drill a clutch of oil wells in South Texas, is meeting resistance.

He took a prominent private equity fund executive out for coffee the other day in downtown Houston and patiently showed him well maps and charts. Mr. Hirs argued that his wells were potentially so rich and easily developed that they could make money at $20 a barrel, less than half the current price. Even if only one of eight wells proved to be a gusher, he promised, big profits were coming.

But the banker cut him off.

Theres too much risk, the banker said, according to Mr. Hirs. And the banker explained that his fund was having trouble raising money from its own investors, who were worried about how long it might take the oil and gas industry to finally recover, Mr. Hirs said.

Things are stuck, he said.